As 2016 draws to a close, there is little doubt it has earned a reputation for being a year of loss.  We’ve lost many notable musicians and other celebrities, some would say America lost its way with the election of Donald Trump, and — on a personal note — I lost my job.  On the history front, this page has also had to report on the loss of some significant pieces of our past:  the grain elevator in Spring Valley, the Clarendon Hotel in Gull Lake, the barn in Fish Creek Park, and even Calgary’s oldest gas station.

Without a doubt in my mind, the biggest loss came in the tiny southeastern Alberta community of Orion.  On Christmas day, Stevens Hardware and Garage burned to the ground.  We first learned of the news on Boxing Day via Facebook when our friend Michael Williams of Into the Void.  Photographs from the road less traveled shared the news.

At first it seemed surreal and we hoped there was some sort of mistake.  However, before long we would watch the video which had been captured and broadcast live on Facebook by Logan Biesterfeldt.  (In addition, you can read an article from The 40-Mile County Commentator which contains photos of the blaze.)

You don’t need to be into Alberta history and ghost towns for very long before you learn the name Boyd Stevens and his hardware store in Orion.  Located along the Red Coat Trail, Orion is one of the many towns which are just a shell of their former selves.  My first trip down that way was in July of 2003 and it was the first time I saw Stevens Hardware.

While more visits would follow, two stand out in my mind.  The first being in 2013 when Emily and I were making our way back home from southern Saskatchewan and we traveled the Red Coat Trail to Lethbridge.  It was her first visit to the area.  What strikes me the most is how little the store had changed, despite the decade between visits.  There was a fresh coat of paint and some new benches out front, but beyond that the two trips could have taken place ten hours apart instead of ten years. 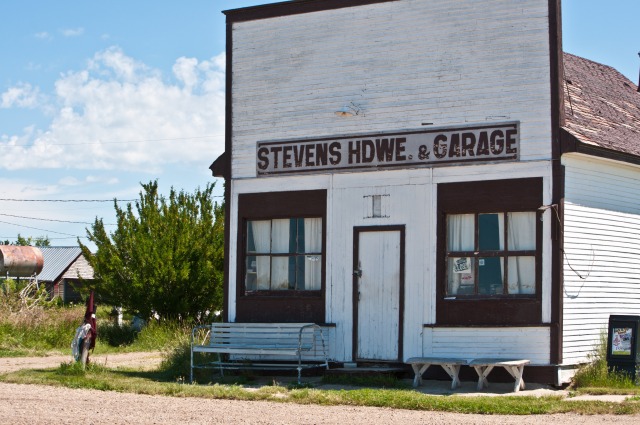 The second memorable visit was in July of 2014 when we visited with a group of friends.  Upon first arriving in town, we found the store was closed.  However, it wasn’t long before our little convoy drew Boyd’s attention and he was shuffling across the dusty streets of Orion to welcome us and to open up for us to go inside — the first time I ever got to meet the man behind the legendary store.

A scene played out countless times over the years. July 6, 2014

As reported in The Commentator (linked above), Boyd suffered some injuries as a result of the fire and was transported to a Calgary hospital.  We wish him a speedy recovery and offer our sincerest condolences to him on the loss of his business.  Get well soon, friend.