This posting got its start back in the summer, August 8 to be exact.  I had a day off from work and I decided to load the dog into the Liberty and go out and do some Geocaching.  I decided to focus on some caches outside of the city and to get some dirt on my tires.

I made several stops that day but the most intriguing was at a small turnout just north of Airdrie and west of Highway 2.  (I’m old-fashioned and still can’t bring myself to call it the QE2).  I pulled into a small turnout just off the pavement and stopped.  In the middle of the open grassland was a small area bordered by a low fence.  Through the prairie grass I could see a faint trail leading up to this fenced off area. 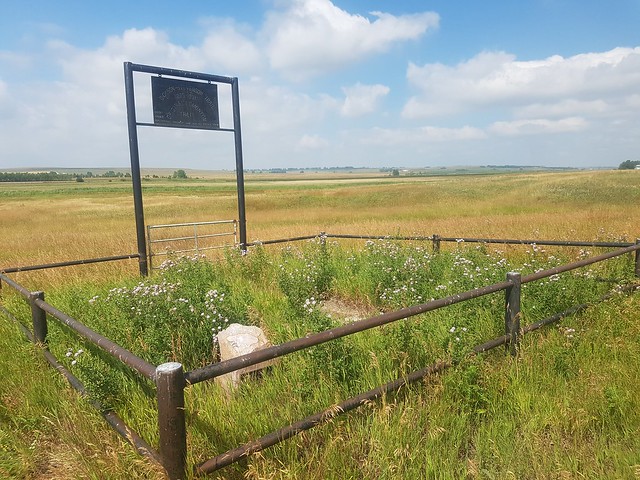 Well, what do we have here?

Tucker and I picked our way through the grass, watching for snakes as we went.  Once we got close enough I could read the sign above the gate:  “Dickson-Stevenson Trail  1875-1931  Original Edmonton Trail  Nose Creek Historical Society 1981  M.D. of Rocky View”

Immediately, I knew we were onto something good here.

I was aware of the Dickson-Stevenson Stopping House, mainly because of the rest area between Airdrie and Crossfield which bears its name.  I have stopped there numerous times, usually when coming home from some adventure and needing one last break for the final push back to Cochrane. 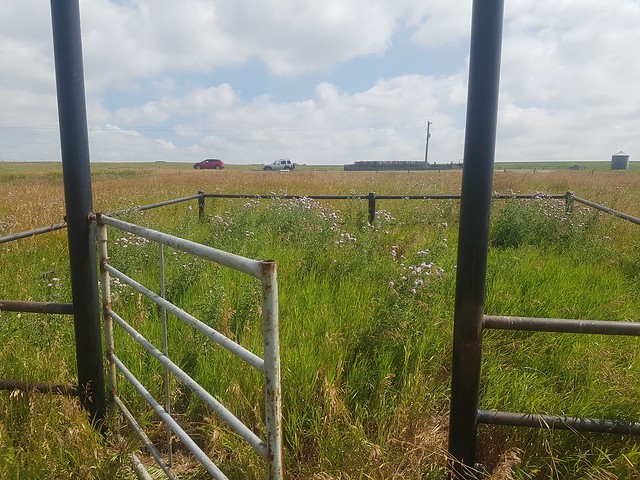 Through the gate we go…

Once inside the gate, I noticed some more markers.  One made mention of the Nose Creek Historical Society “Recognizing 16 Historical Sites North of the Bow 1972-1981”.  Most interesting.  I knew of a couple of others but I had no idea there were so many others.  Since visiting this location, I have since comed to learn that the Nose Creek Historical Society was established in 1969 but fell victim to the fate that many historical societies face:  a declining lack of interest leading to a disbanding.  NCHS ceased operations in 2014.

One of the other markers was a piece of metal set into concrete with stamped letters.  It explained that where I was standing was the location of the Johnston-Stevenson Stopping House from 1879-1900.  The marker was placed by NCHS in 1975. 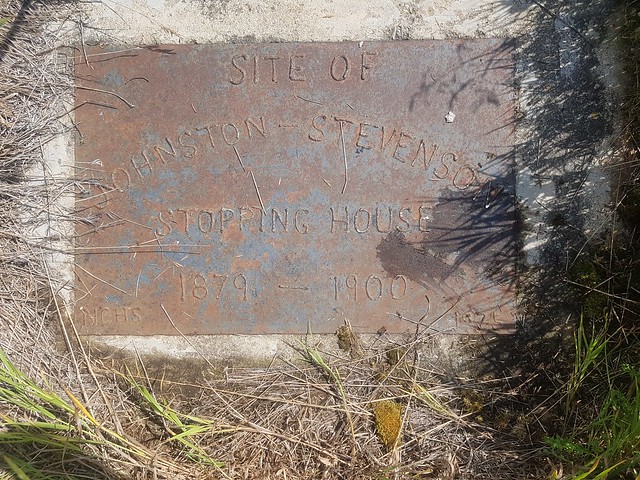 I had never heard of this stopping house.  Once a common site across the prairies, these stopping houses were strategically located to allow travelers a place to grab some food and water and perhaps stay the evening.  They were often stops for stagecoaches.  Clearly this was one of the stops between Calgary and Edmonton, as was the aforementioned Dickson-Stevenson stop just a bit further north of here.

The second marker was placed by NCHS in 1979.  It was titled “To The Many Unmarked Graves of Nose Creek”. 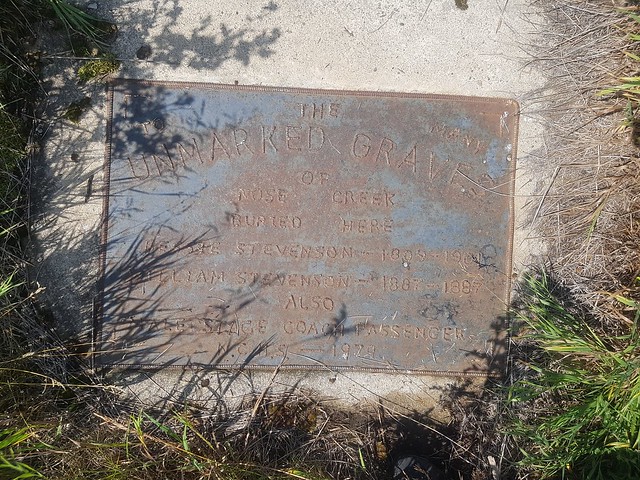 Wow!  After finding the Geocache (which I had almost forgotten about as the original reason for stopping here), I walked back to the Liberty all the which knowing I had more research to do and that this would form the basis for a blog posting.

However, two things surprised me.  First, how little information about this stopping house seems to exist and, secondly, how long it would take for this posting to finally happen.

As I have mentioned many times, my research into these sites is usually very basic.  If Google and Bing (yes, I am THE person who actually uses Bing on a regular basis) don’t reveal much then I’m pretty much done.  Those searches came up pretty dry, mostly pointing to the page for the Geocache I had found.

That page does provide some information and makes reference to a Calgary Herald article from October 1, 1975.  The page tells us Johnston Johnstone Stevenson was wounded in the Riel Rebellion of 1885 and operated a ferry in Calgary prior to taking ownership of the stopping house on July 23, 1886.  When the Calgary-Edmonton Railway opened in 1891, he became the post master at the stopping house which remained in operation until 1900.

Since we know Bessie Stevenson (presumably a daughter) was buried somewhere around here in 1901, it is likely Stevenson remained in the area even after the stopping house closed.

I tried doing an image search of the Glenbow Archives which is usually a great source of photos, but couldn’t find any pictures of Stevenson nor the stopping house.  However, I did learn there is a second plaque for the Johnston Stevenson Stopping House in downtown Airdie, which I haven’t had the chance to see in person, but it reads:

This cairn, erected by the Nose Creek Historical Society, is to commemorate the first stopping house in the area (SW 1/4-36-27-1-W5th), where, four miles north of the present town of Airdrie and one day’s journey from Fort Calgary, food and lodging was available to patrols of the North West Mounted Police in the late 1800’s.

Also as part of my “research”, I learned the NCHS published a book in 1997 entitled “100 Years of Nose Creek Valley History”.  I have requested to have a copy delivered to the library here in Cochrane, in the hopes it will provide me with more information about the Johnston-Stevenson Stopping House and also give me some new ideas of places to seek out.  Perhaps it will have a list of the other fifteen sites they marked.

I will be sure to provide an update once the book arrives and I have a chance to learn more.