Dance the Night Away in Saskatchewan

In reality, the miracle is simply a function of geology.  The lake basin was carved by glaciers and several springs in the lakebed release mineral-laden waters into the lake.  The lake does not have any natural outlets so the minerals simply build up and give the water a unique composition of minerals such as sodium chloride, magnesium sulphate, potassium sulphate, and calcium sulphate, and others.    It has been nicknamed “the Dead Sea of Canada” thanks to the purported healing qualities of the water and the density of salts which makes it easy to float in it.

Emily and I have had the opportunity to visit Manitou Beach on several occasions between 2012 – 2017, usually for purposes of visiting the Manitou Springs Resort.  That was the primary purpose of our day trip of December 27th, 2017 when we set out from Saskatoon for Manitou Beach.

However, no trip with us would be complete without at least one stop for some quirky roadside attraction.  On this day it was a sign proclaiming Young, SK as the home of the “World’s Largest Freestanding Mural”.  It caught our attention on the way to Manitou Beach but it was only on the way back when we took time to check it out up close. 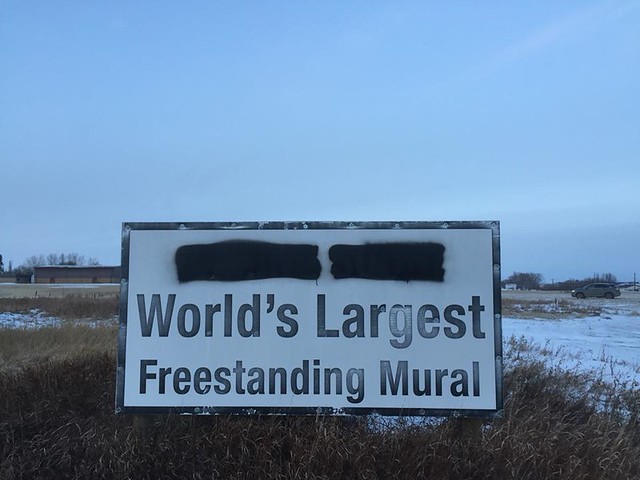 Our first thought was that the sign had been vandalized, but the spray paint marks were simply covering up the words “Coming Soon”.  (Photo courtesy of Emily Overes)

The artwork on the mural is very well done and highlights the history of Young and area.  We’re not really sure if anyone validated the “world’s largest” claim or not, but we’re thinking maybe the inclusion of “freestanding” as an adjective limits the competition.  Regardless, the mural is 20′ high and 80′ long or roughly 6m x 24m for those who think metric, which I guess I should considering this is Canada.  The mural was originally painted in 2012 and was going to be mounted on the side of the ice rink but the size of the artwork meant the town couldn’t verify the integrity of the building so it was instead set up as a freestanding mural instead. 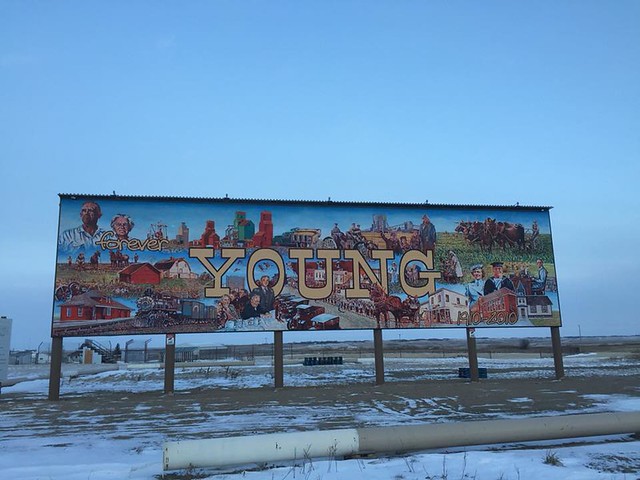 Once in Manitou Beach, we had to stop in and check on Danceland.  Danceland really is the main focus of this posting — way to bury the lead, eh?

Construction of Danceland started in 1928, which would have been right at the peak of the tourist boom in Manitou Beach.  Reports are the first dances were not held until 1930.

Danceland is unique because of the construction of the dance floor itself.  It actually consists of two floors — a solid floor and a floating floor, with a layer of horsehair in between.  Several inches thick, the horsehair gives the floor a unique bounce and allows dancers to go all night without tiring as much as they would on a traditional floor.  It is reported that the floor will actually bounce about and inch-and-a-half when under full load, which is often 500 people.  The dance floor covers an area of 5000 sq. feet. 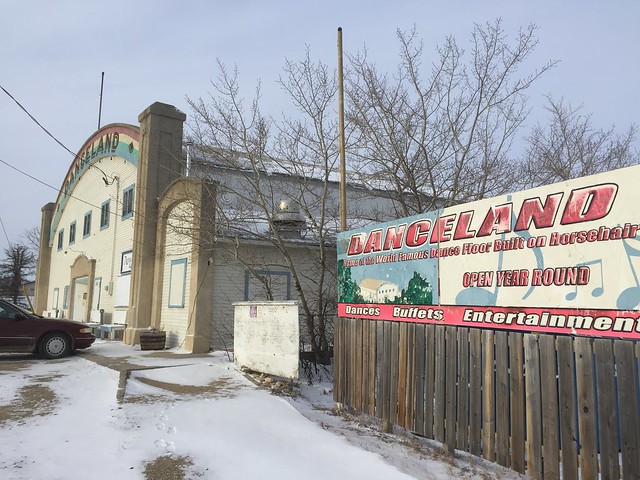 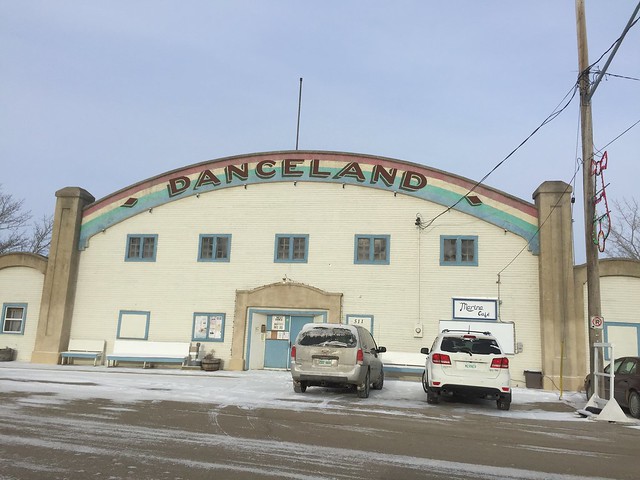 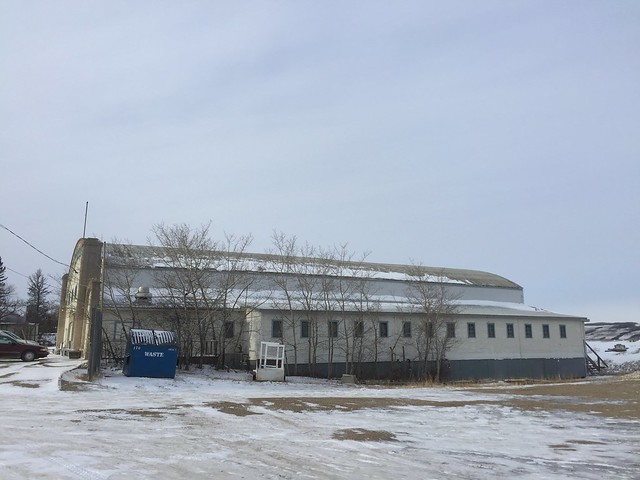 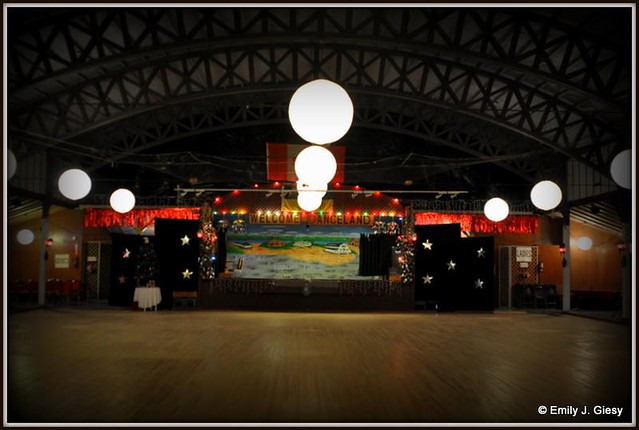 Interior photo of Danceland.  Taken by Emily Overes (nee Giesy) in July of 2012 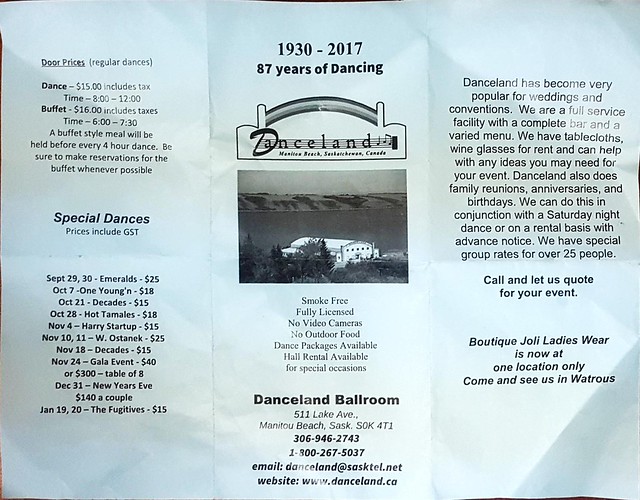 Heritage buildings are under constant threat, and Danceland is no exception.  In this case, the very water that brought the people to Manitou Beach and made Danceland possible is the biggest threat to the building.  With no outlets, Little Manitou Lake is very much at the mercy of nature when it comes to water levels.  In 2011, a large berm was needed to keep the flood waters at bay.  During our first visit in July of 2012, the owners had portable pumps set up and were desperately trying to keep the foundation dry.

It was during that visit we were lucky enough to get inside and see the famous dance floor for ourselves, but we have yet to actually make it to Manitou Beach for one of the dances.  It shall remain one of our exploration bucket list items for now.

I had wanted to shoot some drone footage of Danceland but the cold weather and a tight schedule put those plans on hold.  So, instead check out this short video made by Tourism Saskatchewan and learn more of the history of Danceland.

1 Response to Dance the Night Away in Saskatchewan