Over the next few weeks I plan on revisiting each of the Geocaching Souvenirs I have earned and reminisce about how I came to earn it.

“Souvenirs are virtual pieces of art that you can discover and display on your
profile page. They are associated with a particular location and may also be
bound by time.”

It only makes sense that the first souvenir I earned was for my home province.  Souvenirs were only created in October of 2010 but were awarded retroactively, so officially I obtained this souvenir on December 21, 2003.  That was the day I found my first Geocache and got started on this hobby.

For me Geocaching was an excuse to buy a GPS.  I had read about Geocaching several months earlier, but simply didn’t have the technology to participate.  While today almost every phone has a GPS receiver, back in 2003 it simply wasn’t the case.

The first cache I found was GCA8A5 “A Dam Good Cache”.   I remember reaching the parking area and seeing that the cache was still 600m away and thinking “There is no way I can walk THAT far.”  Well — surprise! — not only could I walk that far but I actually found the cache too!  It was an old tackle box hidden behind some sandstone rocks.  Up until the moment I moved the rocks and exposed the container I honestly didn’t know if Geocaching was a real thing or simply some sort of elaborate Internet hoax,. 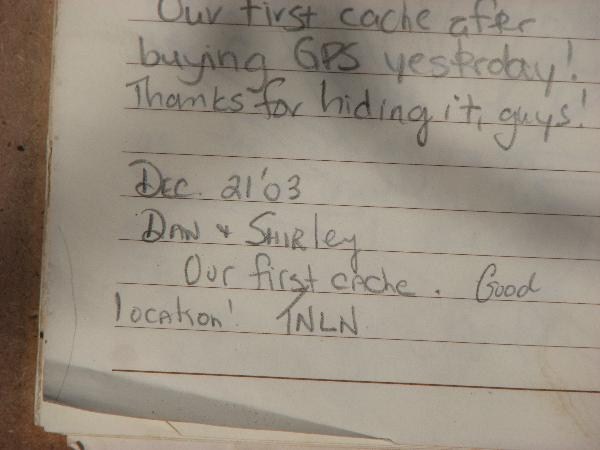 So much has changed since then.  I am now only married in the legal sense, Geocaching has exploded in terms of the number of participants and caches, and the area where the cache was hidden is no longer accessible to the public.

As for the cache itself?  Well, it was last found in April of 2009 and was finally Archived on July 9, 2009 after seven people failed to find it.  A sad end to a cache that will always hold a special place in my heart and my caching history.  My first cache and my first Souvenir, and — most important — my first Geocaching memory.

This entry was posted in Geocaching. Bookmark the permalink.