It’s our last full day on Hawaii and there is still one place left on our “must visit” list: the famous Green Sand Beach, known properly as Papakolea Beach. It’s an almost three mile hike each way but we’ were determined to see it.

Spoiler alert! We made the hike successfully and even found a Geocache while there.

Afterwards, we head over to Naalehu and visit the Punalu’u Bake Shop, billed as the southern-most bakery in the USA. You can check out their offerings here: https://www.bakeshophawaii.com/

Of course, we’re not done — more beach stops and sightseeing followed by a drive along the backroad from Pahala to Naalehu to enjoy some non-highway miles. Just because it is our last full day doesn’t mean we’re not packing in the fun.

Copy of my Geocaching log for GC5MXRA “Not the Green Sand Beach”:

This was our last full day on Hawaii and this was the last location we had on our “Must Do” list that we needed to see. We arrived early to try and beat the worst of the heat and the crowds. While we were getting ready to start the hike, we saw a family drive up in a mini-van and they got out and started walking down towards the beach when they were approached by the locals who were offering rides. After a brief conversation we saw them get back in the van and leave. We weren’t sure if they were in the wrong place and got directions (they didn’t look prepared for the hike), if they had planned on getting a ride in and balked at the $20 / person going rate, or if they were simply uncomfortable and left. Either way, we were a little on edge wondering if we were going to get hassled as we started off. The locals paid no attention to us and didn’t say anything. From there it was the relatively long, dry, and hot walk to the top of the bay. At least there was a strong wind to keep us feeling a bit cooler.

Went down to the beach and we actually had it to ourselves for a few minutes before the crowds started to arrive. Some had walked in behind us and some had arrived by Jeep. It got very crowded very quickly. The other thing was the wind — our bare legs felt like they were getting sandblasted by the grains of Olivine being whipped up and tossed around.

We gathered our answers for the Earthcache and then made the climb back up to the top. From there EmOCan played it smart and waited for me while I decided to go for this cache. I should have read the description better as I climbed the ridge instead of following the path as described.

I got to the top and saw I still had a few meters left to go. Oh crap! Way out there? I’m not sure this is a good idea. Then I saw the direction the arrow was pointing. Oh, that seems a bit better.

I started dropping down and got to a point where I needed to start moving laterally again. Hmm, this looks a little sketchy. I seemed to have pretty good footholds so I slowly moved over to ground zero. OK, heart rate is climbing. This is still fun. This is still safe. Just a bit further.

I got to one spot where I jarred a couple of rocks loose and they tumbled down towards the ocean. Oh man, I sure hope no one was down there! I knew EmOCan would be starting to worry as this was taking longer than expected and I had dropped out of her sight on the far side of the ridge. Take it easy. Don’t rush. Stay calm. Never too later to turn around until it isn’t.

I finally started searching, determined not to let this end in a DNF. I finally found it! It was smaller than expected so that may have messed me up for a few minutes. Got a photo of me with the cache at ground zero so I would have something to remember this experience. Cache was replaced and then it was a slow walk/climb back to more safe ground and then back up the ridge and then down to EmOCan. 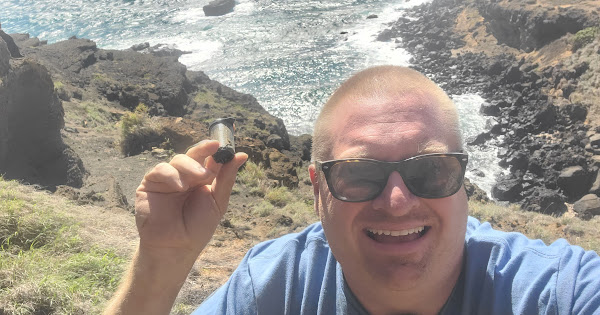 This wasn’t the first cache on Hawaii to leave me breathless thanks to a combination of the scenery and terrain. It made for a great story to tell EmOCan on our walk back to the trailhead. Wow, what an experience! An instant Favorite cache, for sure. (This is one of those rare caches where you know it’s getting a Favorite point before you even get close to ground zero.)

By the time we started our walk back there was a constant parade of people walking in (some looking prepared and some not-so-much) and others being ferried in by the locals in Jeeps and pickups. We even saw some dirt bikes. Our total trip time was roughly three hours — one hour in, one hour at the beach and finding the nearby Traditional cache, and one hour back out. What a great day!

We are entering our last weekend on Hawaii and we continue to tour and sightsee on the Big Island. The highlight today is touring on a glass bottom boat to check out some fish and sea creatures.

We are kicking off our second week on the Big Island of Hawaii and it’s my first day as a 50-something.

It wouldn’t be a DanOCan special day if I didn’t get in a little Geocaching and we start by finding a geocache at the old Holualoa Post Office.

From there we check out how Kona coffee used to be produced by visiting the Kona Historical Society Living History Coffee Farm.

Our next stop is the St. Benedict Roman Catholic Church from 1899. This is known as “The Painted Church” because of the murals which adorn the interior of the building.

We wrap up the day with a beer at the Kona Brewing Company and then dinner at the Fish Hopper Restaurant with a giant pineapple drink.

My 50s are off to a rockin’ start! Here’s to all the adventures yet to come.

My Last Day as a 40-Something

Our seventh day on the Big Island of Hawaii and it’s the last day of my 40s. This was the day we booked our official Hawaiian lu’au so we didn’t want to stray too far away from Kona and the west side of the island.

We start our day by heading down to Miloli’i, which is billed as “The Last Fishing Village in Hawai’i Nei.” The neighboring village of Ho’opuloa was buried by a lava flow from Mauna Loa in 1926 but this village survived. Miloli’i Beach Park wasn’t very busy and offered some beautiful coastline so we got DroneOCan out for a look from up above.

We then check out Pu’uhonua O Hanaunau National Historic Park and learn more Hawaiian history before heading back to Kailua Kona to attend the Island Breeze Luau at the Courtyard by Marriott King Kamehameha’s Kona Beach Hotel. So long 40s! Here’s to all the adventures yet to come.

Exploring the North Side of the Big Island

We don’t always plan our days. Sometimes we enjoy just seeing where the winds take us.

We start at Pu’ukohola Heiau National Historic Site and then just decide to start driving north and see what we find. We visit the remains of a Hawaiian village at Lapakahi State Historic Park and then go find a Geocache in Mahukona State Park.

From there it’s the Waipi’o Valley Lookout.

Then Emily finds someone’s driver’s license, credit card, and cruise ship pass and we rush back to the docks in Kona to see if we can reunite it with the owner before the ship departs. It’s a race against the clock!

Finally, we relax at Huggos On The Rocks and enjoy some local music before wrapping up another busy day on the Big Island.