Let me issue a disclaimer right up front.  Under normal circumstances, I wouldn’t disclose the location of this church with this much detail.  I would have normally said “near Sorrento” and left it at that, but I wanted to be able to link to the blog of the group working on restoring this church and their group is called “Save Notch Hill Church” so that name is already out there.

This place was another unplanned stop.  As we were approaching Sorrento, Emily says “Hey, isn’t that neat church with the photo of the train light taken around here somewhere?”  With that, she pulled out her phone and began searching.

Sure enough, she was correct.  So, armed with nothing more than the knowledge that the church was near Sorrento and near some railway tracks, we began our hunt.  I stopped and checked the map and pulled out a likely location and began heading that way.  After about fifteen minutes of hunting, Emily resorted to the phone-a-friend option and we confirmed we were close but we had made a right instead of a left.  Off we go!

If you want to see the original photo that inspired us to check out this location, here is the link to the image on the photographer’s site:  https://kevinmcelheranphotography.smugmug.com/Night/i-mDJX37K/A

It wasn’t long before the church came into view.  The building itself was clearly marked No Trespassing and it was obvious there would be no way to approach the building without either trespassing on farmers’ fields or walking along the railway tracks, which would also mean trespassing.  In addition, there were a number of homes in close proximity which gave us an uneasy feeling of being watched, so I didn’t feel comfortable throwing up the drone either.  As a result, we settled for shooting some shots from the public roadway.

After getting back home and doing some digging, I came across the website of the aforementioned “Friends of the 1922 Notch Hill Church Society“.  Their site provided some insights into the history of this great building, as well as documenting the efforts to save it.  If you compare the photo I took to the one that inspired us to stop here, you can see the church is in much better condition now.  The building and steeple have been straightened, there is fresh paint, and the windows have been covered to keep the pests out.  Their website doesn’t show any updates after late 2013/early 2014, so I don’t know if they ran out of money and/or volunteers, if they lost momentum, or if this is as far as they ever planned on taking the work.  There was some scaffolding visible on the far side of the church, so maybe they just stopped updating the website?

Anyway, using the information from their site, I learned Notch Hill was really established as a community in the mid-1880s because the CPR needed to locate pusher locomotives there to assist in getting trains up the steep grade.  Several of the CPR employees worked as volunteers on the building of Holy Cross Church, which first opened in October of 1922. 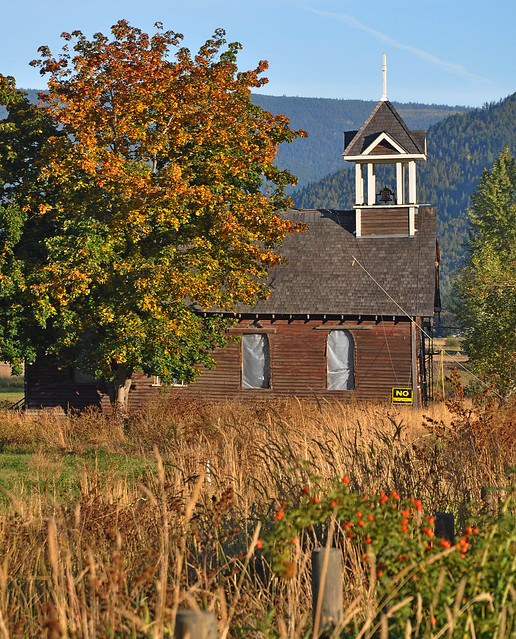 As the 1960s rolled around, the church’s fate was sealed by a combination of factors, the largest being the overall decline in church attendance which was being seen all across society.

Another factor was the addition of a second and third set of tracks being added by the CPR.  Those tracks forced attendees into the same dilemma we faced:  to access the church you either had to walk across farmers’ fields or trespass along the railway right-of-way.  With access limited, the usage declined and the final recorded event taking place in the church was the 50th anniversary celebration of Anne and Carl Frederickson.  Carl was one of the volunteers who originally built Holy Cross and so it was fitting he was there for the end.

The church was left to rot until 2012 when the Friends of Notch Hill Church Society began restoration work.  As they word it, “the bell tower had a significant lean, much of the roof on the eastern side was torn away, and the whole building was tilting 16 inches toward the east.”

You can see a lot of “in progress” photos on their site, including a photo on the “History” page which shows the church being used in the 1960s.  What I found noteworthy about that photo is that the bell does not appear to be in place, nor is it in place in the Kevin McElheran photo — they must have put one back in place at some point during the restoration, but I don’t see it specifically referenced on their site.  I wonder if it is the original bell.

I think I’ll reach out to their society and see if anyone is still monitoring the email address.  If I hear back from them, I’ll be sure to post a follow-up.