I’ll bet you thought we were done with the Scratch the Surface Tour 2017, didn’t you?  Well, surprise!  There’s at least one more story to tell…

It had been more than thirty years since I had visited Fort Steele, British Columbia.  My dad and I were on a camping trip to the Cranbook area back in 1986 and he brought me here.  I honestly didn’t remember much about it, other than the water wheel visible from the highway and that I absolutely had a great time checking out the historic town.

Much has changed since then.  My dear old dad is long gone, having died less than four years later.  I also learned that Fort Steele was an actual town and not a conglomeration of buildings like Heritage Park in Calgary.  That makes our visit as the last major stop of STST2017 all that more special.

Fort Steele was originally founded in 1864 as Galbraith’s Ferry and its location on the banks of the Kootenay River made it an ideal location for a crossing.  In 1888 the name was changed to Fort Steele to honour legendary Canadian lawman Sam Steele of the North-West Mounted Police.

In the 1890s, the Canadian Pacific Railway bypassed Fort Steele and instead ran its line through nearby Cranbrook.  That was the beginning of the end for Fort Steele and its population declined until it became a decaying ghost town.

The BC government designated as a historic site and preservation/restoration efforts were undertaken.  By 1969 the town was opened to the public and it remains a significant tourist attraction to this day.

It was Thanksgiving Day when we visited and we arrived as soon as the gates opened.  Those two factors combined to give us a chance to check out the town with very few people around.  It had a true ghost town feel. 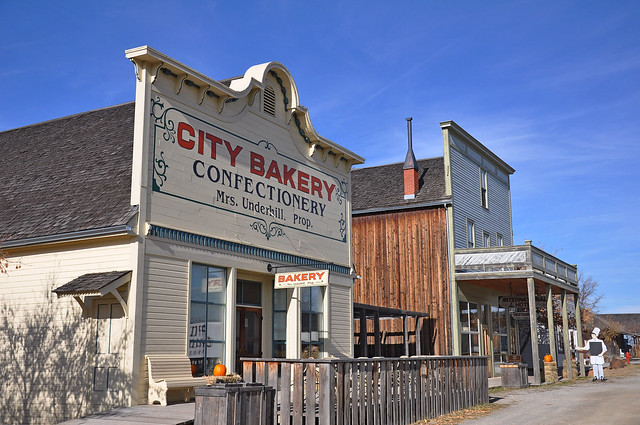 Not every building in the town is original.  Some have been constructed as recreations of buildings that had been lost over the decades.  Others have been moved to different spots in town.  The old townsite is somewhat bisected by the current alignment of BC Highway 95.  In other cases, some buildings have been deemed too far gone to be saved so they have been fenced off and are being allowed to naturally decay, which gives the public a chance to see what would have happened to the whole town had the government not stepped in. 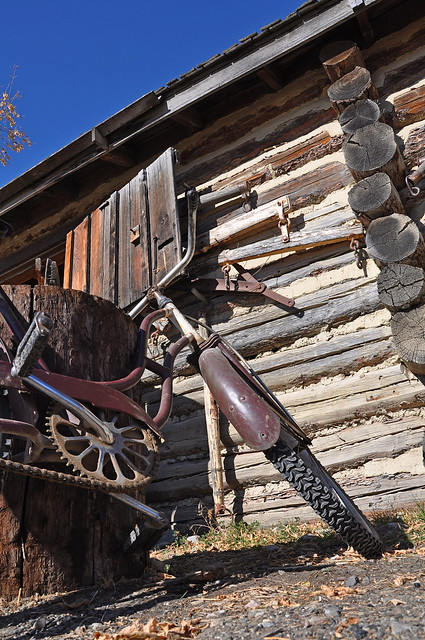 The town is not just a collection of buildings, however.  They also have animals such as chickens, horses, and sheep.  There are also live shows presented inside the Wildhorse Theatre, but we didn’t get to see a performance because of the holiday and being in the off-season. 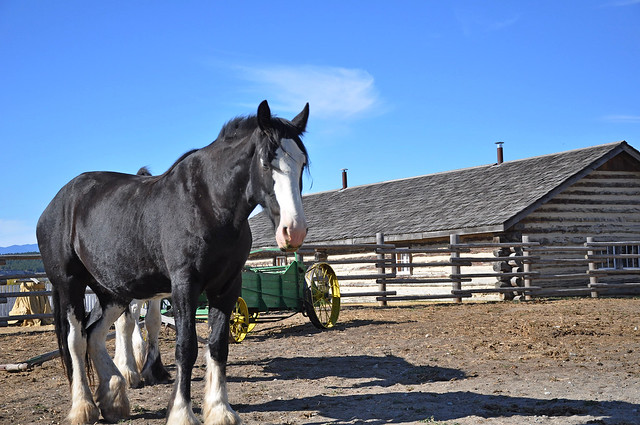 The town also operates a small section of railway and has a collection of rolling stock in various states of repair.  Again, because of the timing of our visit we weren’t able to partake in any train rides, but we were able to have a soup and sandwich at the small cafeteria which operates inside the main entrance building.

An old rail car weathers away

And, Finally, I was able to revisit the famous water wheel that I remembered from my previous visit and from all the trips I have made down this highway without having time to stop. I was able to learn this water wheel is a restoration and was originally located about 25 miles west of Fort Steele and was built by Perry Creek Gold Mines Ltd. It has a diameter of 32 feet and contains 72 buckets, each of which can hold 70 gallons of water. Clearly the sign was put in place before Canada converted to the metric system. 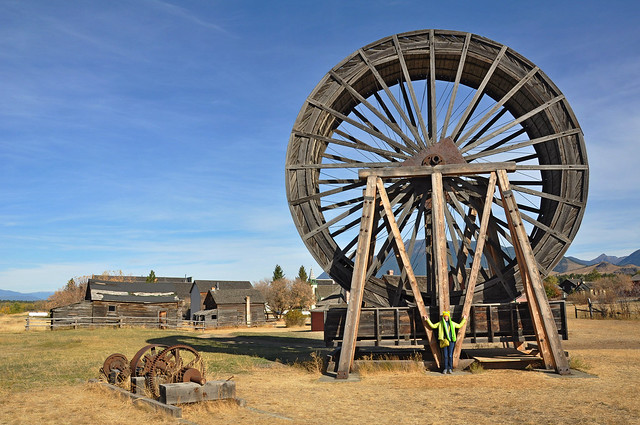 Fort Steele is dog-friendly and has a separate entrance to the left of the main building. Normally people enter through the building itself but because that is also the location of the cafeteria they can’t allow pets in there. It was great that Emily and I could have Tucker with us so we didn’t need to rush our visit knowing he was waiting either in the motel or in the car.

Fort Steele was certainly worth the stop and we both want to come back again — here’s hoping it won’t take me another 31 years to get here!