So close to home, yet a world away.  That’s the best way I can think to describe Glenbow Ranch Provincial Park.  Located just south of Highway 1A between Calgary and Cochrane, once you leave the pavement it is hard to imagine you are sandwiched between a town of 25,000+ and a city of more than a million people.

The written history of the land upon which the park is built really starts in 1881 when the federal government granted a large-scale grazing lease to the Cochrane Ranche Company, which was headed by Senator Matthew Cochrane of Montreal.  The ranch covered 109,000 acres with its main buildings built beside Big Hill Creek in what is now the town of Cochrane.  The ranch would last until 1888 when it was sold for division into homesteads.

During the years of the Cochrane Ranch, the area saw the coming of the Canadian Pacific Railroad.  After reaching Calgary in August of 1883, the railway would make steady progress until reaching Banff just weeks later.  The line followed the Bow River valley, which provided a steady source of water for the crews and the steam engines.  Today, 135 years later, the railway still runs the same course and trains are a common sight, although we didn’t see any during this visit. 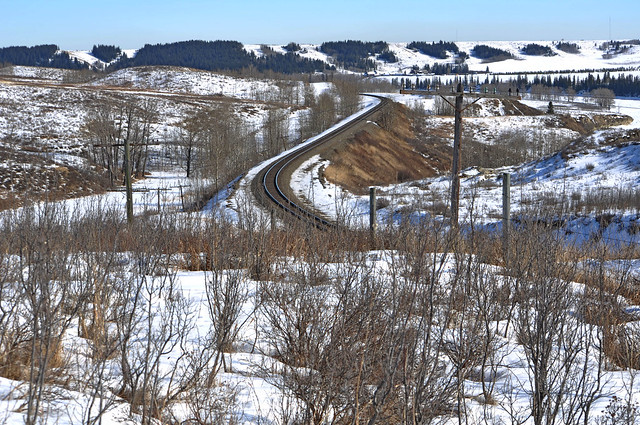 Looking east along the CP mainline.  We were not fortunate enough to see a train pass while we were here. 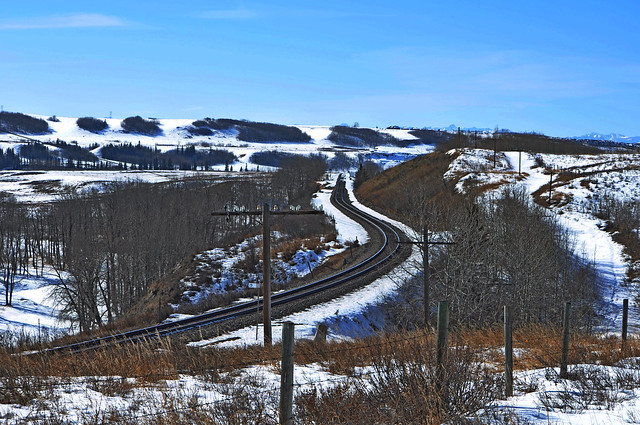 The CP mainline continues westward to the mountains and Pacific coast.

After the Cochrane Ranch sold off the land, a couple of the homesteaders to arrive in the area were Joseph and Elizabeth Cockbaine of England.  They laid claim to a section of land in August of 1893 and began the process of building on and improving the land.

Three years later, the Cockbaine family had built Waverley Ranch.  In addition to a house and outbuildings, they had 22 cattle, seven horses, and 2000 sheep.  When Joseph applied to the Land Office for a Letter Patent, he learned he had actually developed the wrong piece of land.  The Government overlooked the mistake and granted him title to the property in 1897.  Today, only the chimney from the Cockbaine’s ranch house remains, standing in the field just south of the pathway, fenced off in a protected area.  It was this chimney which was our target of today’s hike. 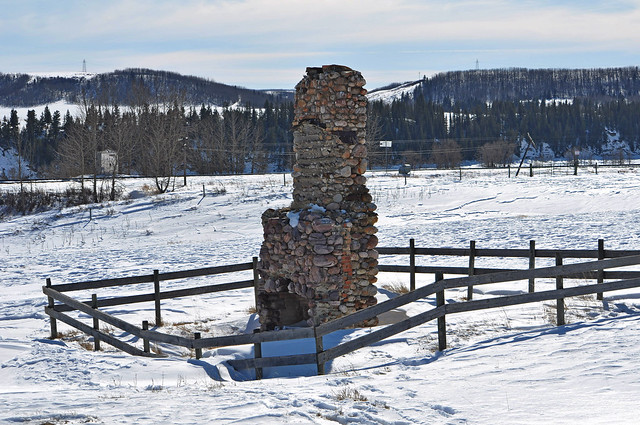 The Waverley Chimney.  Today’s visit was my first time venturing to the western side of the park. 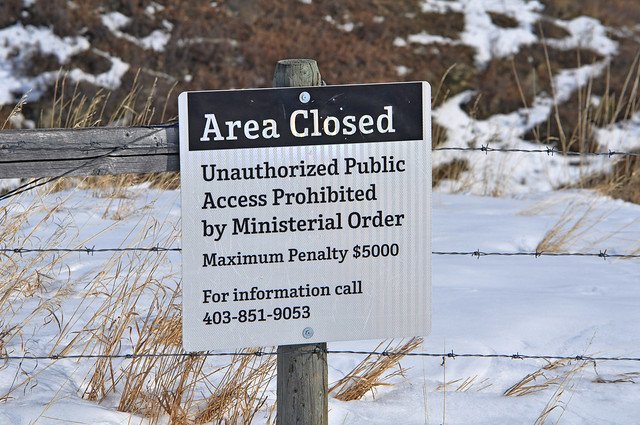 The Waverly Chimney is inside a protected area.  All photos used in this posting were taken from public pathways.

This isn’t the only history in the park.  The CPR had established a railway station at Glenbow by 1903.  Between the years of 1907-1912 a sandstone quarry was established at what is now the east end of the park.  After the quarry closed a brickyard opened in the same area.  While there were great plans for the town of Glenbow to grow into a major urban centre, it simply did not occur and the town declined throughout the 1920s until the last residents moved away in 1927.

There are only a couple of buildings which remain from the town of Glenbow.  The most known is the former general store and post office, which remains in the park.  Like the Waverley Chimney, it is fenced off and in a protected area with no public access, although it is visible from the pathway. 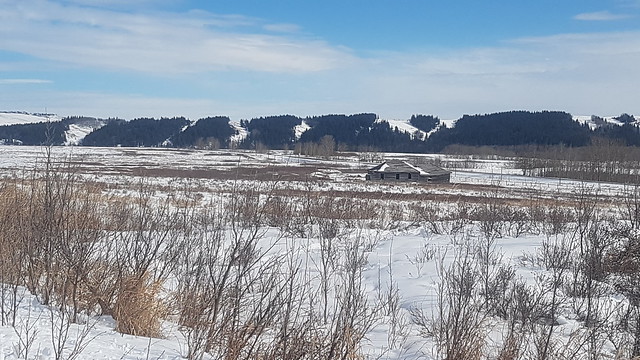 The Glenbow General Store and Post Office.  Closed in the 1920s, it is the last remaining building from the town of Glenbow to remain on site.

The second building which remains is the old Glenbow schoolhouse.  It was moved out of the valley and today stands just north of Highway 1A and has been converted into a private residence.

After the demise of Glenbow as a town, the land continued to be used as private ranchland.  The Harvie family purchased the land in 1934 and it remained in their hands until 2006 when they donated 3246 acres to the Government of Alberta for the establishment of a park.

Glenbow Ranch Provincial Park officially was designated in April of 2008 which kicked off a number of developments which were needed before the park could be opened to the public.  These included washrooms, picnic tables, pathways, signage, and a designated railway crossing.  It was not until the summer of 2011 before Glenbow Ranch Provincial Park was open to the public.

Since then, I have made multiple visits to the park in all seasons.  Two of those visits over the last three days formed the basis of this posting.  The park offers a variety of paved and dirt pathways and boasts nearly 25km of trails.  The area retains ties to its cattle grazing history and at various times during the year some areas may be closed as cattle are moved around or graze different sections. 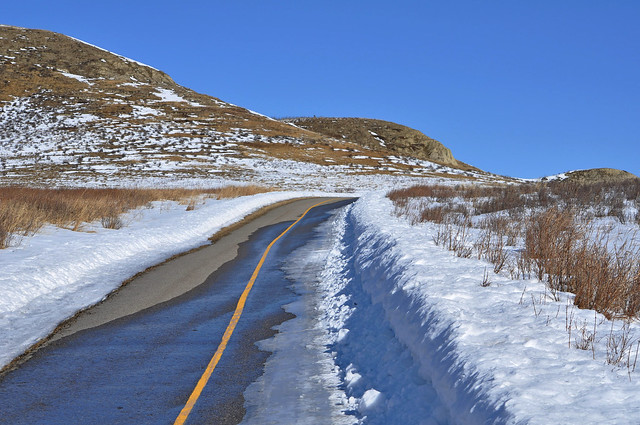 The paved pathways have been plowed and cleared of snow, making access to the park simple in all seasons. 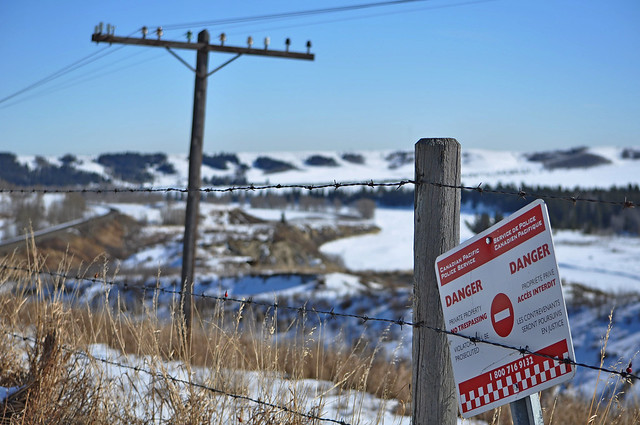 All land along train tracks remains the private property of CP Rail and access is prohibited.

Glenbow Ranch Provincial Park is open year-round during daylight hours.  No campfires or horseback riding.  Dogs must be leashed.  Obey all area closures.