When faced with a Sunday and no real plans, what else to do besides jump in the car and head out and visit another one of Alberta’s historic places?  Today’s journey takes us to the ghost town of Nordegg and the remains of the Brazeau Collieries.

This is not the first time I have been to Nordegg.  Even going back to a child on family camping trips to nearby Rocky Mountain House, we would drive past the Nordegg turnoff.  I remember asking my parents “What’s in Nordegg?” and they would answer “Nothing, just the remains of an old mine.”  Well, what a way to stoke the imagination of a child already fascinated with old abandoned places.  When I would ask if we could visit, they would tell me “No, it’s a prison now so you can’t go in there.”  Rather than being some parental white lie told as a means of shutting down my imagination, they were telling the truth for this was the era when the Alberta government was, indeed, running a minimum security prison on the site.

It was not until adulthood that I was able to visit the town properly.  In fact, I even got to take the complete tour.  The date was July 26, 2002.  My images from that era are poor quality captures, done with a JVC digital camcorder which took stills at a staggering 640×480 resolution.  Oh, how I wish I had either been shooting film at that time, or at least shooting with a “real” digital camera of the era.  As I would see on my current visit, much has changed and I wish I had better captures of that visit from more than 16 years ago.

I made a second visit to Nordegg with a group of Geocaching friends in August of 2014.  That trip was more focused on caching than history, however.  Emily and I would make the trip up here via the Forestry Trunk Road again in May of 2017.  However, being pre-Victoria Day the tours were not yet operating so we couldn’t see the mine site, just the town.  You can see the drone footage of that trip here. 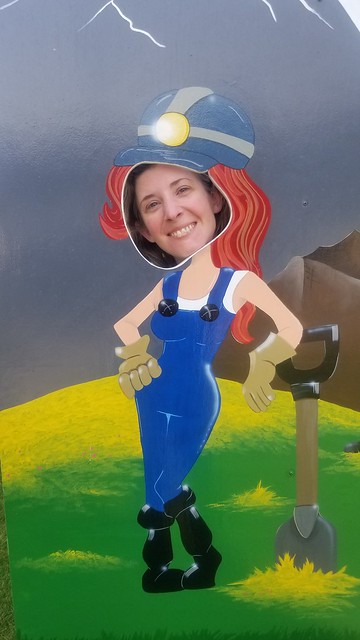 So, on my fourth official visit to Nordegg, we finally were able to do the tour.  We learned that, unlike the tour I had done back in 2002, the tours are now broken into an “upper” and “lower” portion.  The upper tour focuses on the two remaining mine entrances, the ancillary buildings like the shower house, power house, and warehouse.  The lower tour focuses on the briquette plant where the coal was fashioned into briquettes — for use in steam locomotives, not your Weber grill.

We tried to book spots on both the 10:00am tour as well as the 2:00pm tour so we could see the whole thing, but they currently weren’t offering the lower tour because of some sort of issue — I believe I heard it was related to the foundation of one of the buildings or something of that nature.  So, the upper tour it was!

The upper tour lasts about two hours.  You can only access the collieries site with a guide.

After the tour, we went back into the town and checked out some of the changes since our last visit.  The old bank has been placed on a new foundation, has been painted and sealed off from the elements.  Dang it, I knew I should have taken photos of the inside when we were there and it was open.  There also has been some touch-up work done on the old service station too, but nothing compared to the changes made to the bank.

We also took time to visit the cemeteries, both the main town cemetery as well as the grave site dedicated to the 29 miners who died in an explosion inside the #3 shaft back on October 31, 1941.  There was an older coupler doing some cleanup work in the town cemetery, clearing brush and cutting grass.  An employee of the historical site came by and shut them down.  We couldn’t hear the conversation clearly, but it sounded like their efforts were not appreciated by the staff.  Not sure what the story was there.

We tried to tour the museum housed inside the heritage centre, which is the old school.  However, it was locked and staff told us they had hoped it would be open by now but circumstances were preventing it.  Again, not sure of the story there.

Anyway, you’ve read the story so now you should check out the video of our tour.  Come visit Nordegg with us!