While Vancouver Island was our goal for this trip, we actually had very little time on “The Island” itself.  We arrived in Nanaimo in the evening and spent the night with our friend Lila and her husband.  The next day we traveled to Tofino and Ucluelet and then the day after that we made it to Victoria where we joined our friends Chris and Helen for dinner.  The next morning we were back on the ferry and starting the trip home.

While it may have been a bit of a whirlwind visit, we managed to fit in a lot of different sites and today I’ll be highlighting three of them.

The first of three highlights is the Amphitrite Point Lighthouse in Ucluelet.  The current lighthouse was opened in 1915 after the previous light was destroyed by a tsunami in 1914.  The lighthouse itself is a rather drab looking bunker of a building and certainly doesn’t fit the stereotypical vision of what a lighthouse should look like.  However, the location where it sits is phenomenal, complete with waves crashing against rocks.  We were fortunate to be there right at sunset and had beautiful light for capturing photos and footage.  While there is no access into the lighthouse itself, it remains a location well worth a visit.  If you have time, walk around the Wild Pacific Trail and check out the area.  There are ocean vistas around every corner. 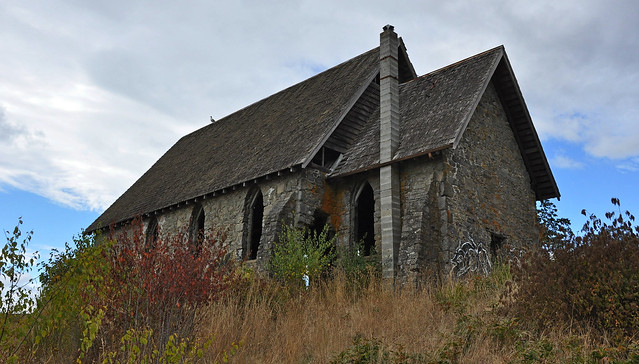 The second location I’m highlighting is the oldest of the three.  It is the Stone Butter Church which was built in 1870 and located near Duncan, BC.

The night we were visiting Lila, we were gathered around the kitchen table and looking over some old books about ghost towns and abandoned places.  While I was engrossed in a book about ghost towning in Alberta in the early 1970s, Emily and Lila were discussing this church.  I apparently missed the entire conversation so I had no idea what to expect when Emily and I decided to detour by this church on our way from Ucluelet to Victoria.  All she promised me was “You are going to be blown away by this place!”

The GPS tried to route us up the road to the front of the church but it was signed as a private road, so we had to approach the church from the back.  This involved using a pullout on the side of the road and then climbing a long stone staircase up a hillside.  It certainly makes for the most dramatic approach as the stone hulk slowly comes into view as you reach the top.

It is known as the Stone Butter Church because the missionary Father Peter Rondealt paid the people who helped build it with funds he earned through the sale of butter from the dairy herd on his mission’s farm.

Apparently, in 1931, Ripley’s Believe It or Not” featured the church in a 1931 report in which they described it as “The church of no services…in which no congregation ever gathered.”  This was actually incorrect, as the church was used for a period of ten years before the bishop determined it would be better to have a church on church-owned land, rather than relying on the verbal agreement the church had in place with the local natives. 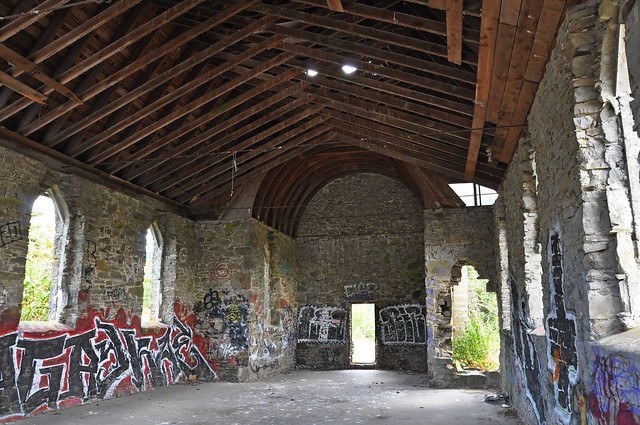 According to some basic internet research, there were three attempts at restoration, going back as far as the 1920s and as late as 1980.  From what I gather, the biggest restoration effort took place in 1958 which is when the roof was repaired.  Sadly, the efforts made to preserve the church are no longer in evidence anywhere as it sits open to the elements and, as you can see in the above photo, vandals. 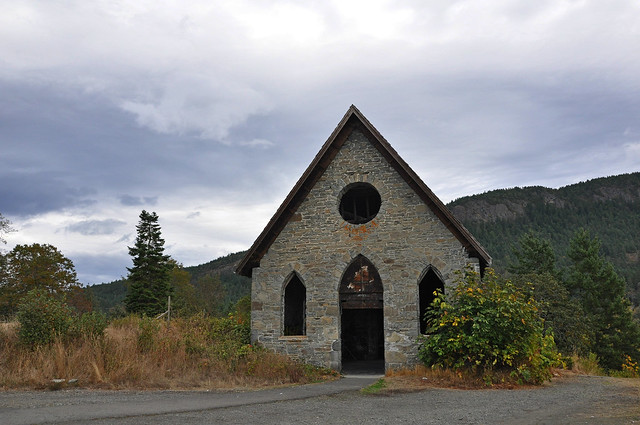 According to the legends, the local native population consider the church to be haunted.  We didn’t experience any paranormal activity but there was certainly a sense of unease, most likely because we weren’t sure about the legalities of us visiting the site with it being located on a native reserve.  Clearly we are not the only ones who visit it and photograph it, based on the number of hits one can find on the internet regarding this church.

And, finally, our last highlighted stop is the Kinsol Trestle.  Completed in 1920 by the Canadian National Railway, it was in operation until 1979 and abandoned in 1980.  It would sit for more than 30 years before being restored and incorporated into the TransCanada Trail in 2011. 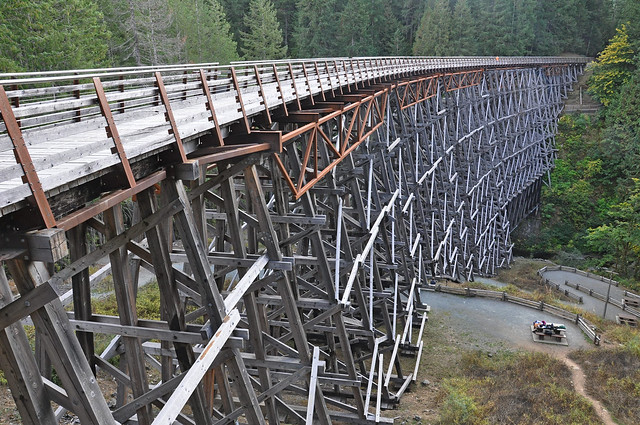 It stands 44m high and spans 188m across the Koksilah River, making it one of the largest wooden trestles in the world.  It is an impressive structure and walking across it certainly has to make one impressed with the engineering feats we were able to accomplish almost 100 years ago.

We used the GPS to navigate to the trestle and it took us on quite the tour through rural Vancouver Island.  We were just beginning to get a little skeptical about whether or not we were going the right way when we suddenly saw the parking area which provided easy access to the trail.  It was just a short 300m walk to the north end of the trestle.

The structure is so large it is difficult to capture in photographs.  Since it wasn’t very busy I put the drone up in the air and captured some footage.  The video below shows some highlights of the Vancouver Island portion of the trip:  Long Beach, the aforementioned Amphitrite Point Lighthouse (starting around 0:57) and the trestle (starting around 2:00).  Check it out and please let me know what you think in the comments.