Sometimes postings just fall into your lap.  Today is one of those examples.

I was out for a walk in the northern part of Calgary, near the community of Sage Hill.  In the midst of the new condo buildings and shopping centres, I came across something I didn’t expect to see – a farmyard.

This shouldn’t have been such a surprise.  The land around Calgary was all farms and ranches since the settling of the prairies.  In the nearly thirty years I have lived in Calgary, I have seen a tremendous amount of growth and suburban sprawl.  Many of the quiet country roads I used to drive have been erased from the map completely as the city expanded. 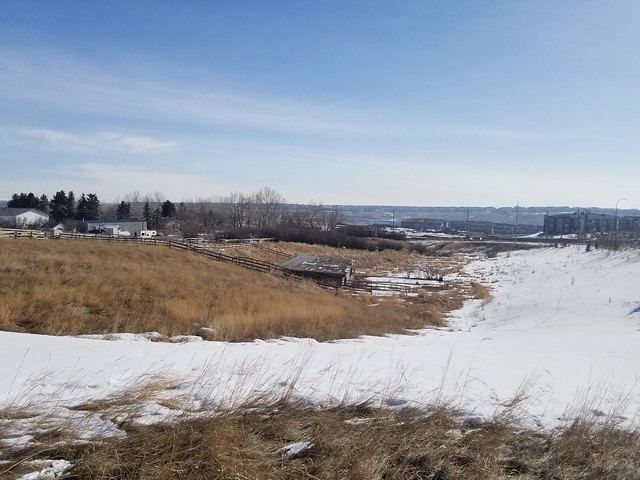 Condos Rise in the Distance

I guess my surprise came more from seeing this lonesome holdout of a past era than anything.  After all, when a cash-laden develop backs up a truckload of money to your door even the most stalwart defender of the family farm is likely to surrender to the inevitable.

Sure enough, as I got closer I saw a notice board placed near the property’s edge.  “Proposed Redesignation”, including the standard buzzwords “mixed use development”.  Yes, this little relic is not long for this world. 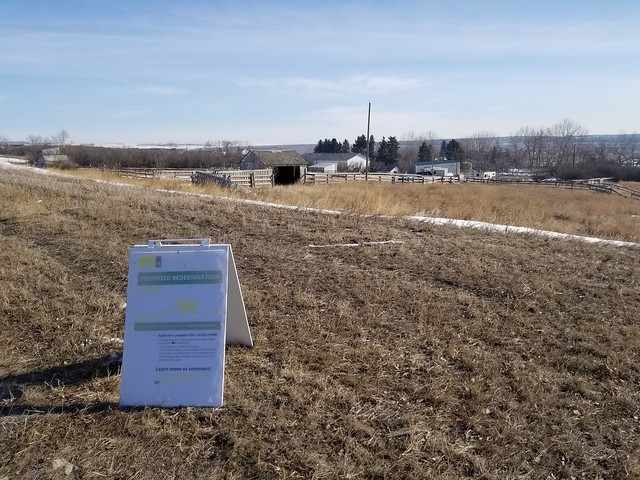 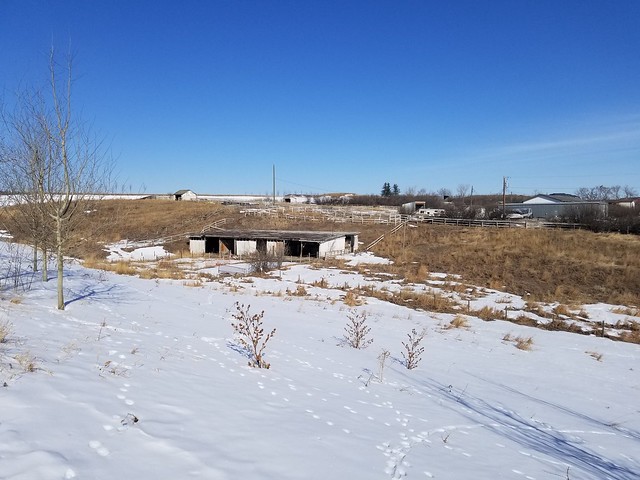 Another view of the farmyard

I took some photos and continued wandering around the area.  Just a little bit further north I saw a rusting combine sitting beside an intersection.  Right now this is a pretty quiet street but before long the concrete barricades which blocked the west leg of the traffic circle will give way to a brand new neighborhood. 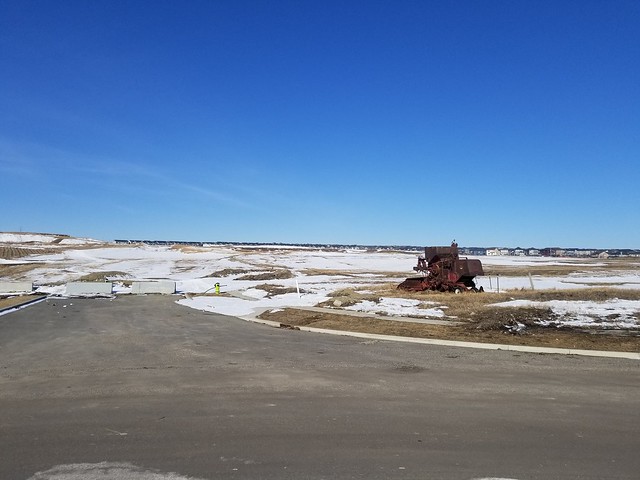 Where the future road will go

I had to wonder what will become of this metal beast as things develop.  While I would love to think it would sit at the entrance to the new community and serve as a reminder of the rich agricultural heritage this ground was once coveted for, we all know it will likely be hauled away for scrap and the memories of the countless bountiful harvests it played such an instrumental role in bringing home will be lost.  After all, we can’t have the future kids who will call this neighborhood home playing on some rusty metal thing, can we? 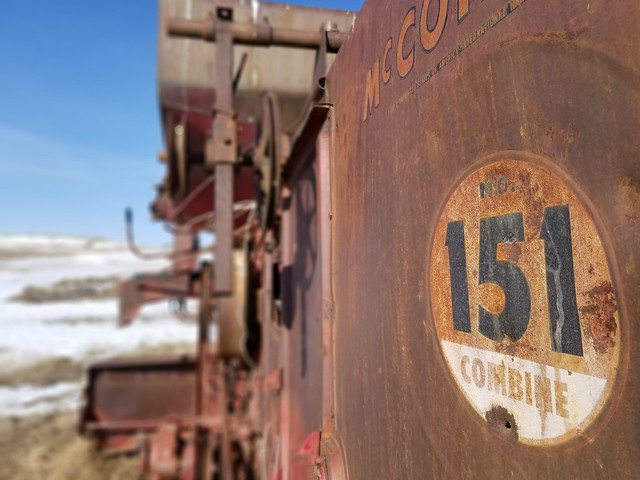 I snap several photos, knowing that this area will change and develop rapidly over the next several years and, if I return to this spot in the future, the landscape will look very different.  My photos will be a quaint reminder of what was once here.  Once again, I find my role to be documenting the present so it can be the future past.

That turned my thoughts to another historic site which could have been the victim of urban sprawl but which was somehow spared the bulldozer.  Despite having known of its existence for several years, I had never made the time to visit.  I figured today would be as good a day as any.

I drove down Stoney Trail and eventually into the community of Panorama Hills.  From there I made several turns and finally came to a stop in front of a tiny greenspace, bordered on two sides by houses and at the back by 14th Street NW.

From the road you wouldn’t know this is a historic site, but when you get out and approach the cairn you soon learn the significance.  Yes, this is the spot where George McDougall is believed to have died. 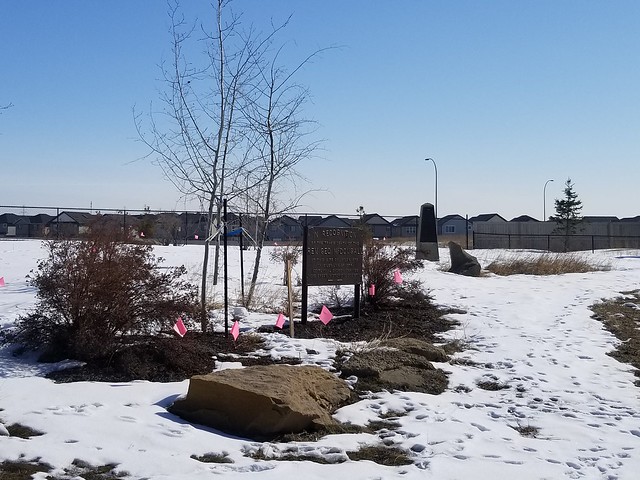 The small park with the McDougall Memorial sign and cairn

If you are a regular reader of my blog, you will know the name very well.  Yes, this is the same McDougall who was associated with the McDougall Church out near Morley.  (See the links at the bottom for previous postings about the church.)

George McDougall had been leading a party of buffalo hunters in January of 1876.  They were bring back their bounty to the Morleyville settlement which was struggling with low levels of food supplies.  George rode on ahead of the party and was caught in a blizzard.  It is believed he died of a heart attack and was found at this spot several days later.  His body was taken to Morleyville but was not buried at the church there, despite that being the location of his headstone.  Instead, he is actually buried on the other side of Highway 1A in a cemetery owned by the Nakoda that is not accessible to the public. 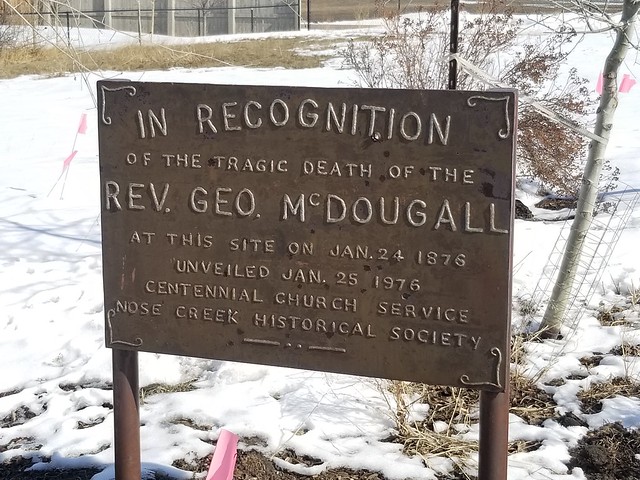 As you stand here now, surrounded by houses and cars, it is hard to believe how different this landscape would have looked back in 1876.  This was less than a year after George and his son John had worked with carpenter Andrew Sibbald to build their church at Morleyville.  The Canadian Pacific Railway was still more than seven years away from reaching the area.  Calgary would not even become a town until more than eight years later in 1884.  No, when George McDougall finally drew his last breath here in the swirling maelstrom of a prairie blizzard he may as well have been on the moon. 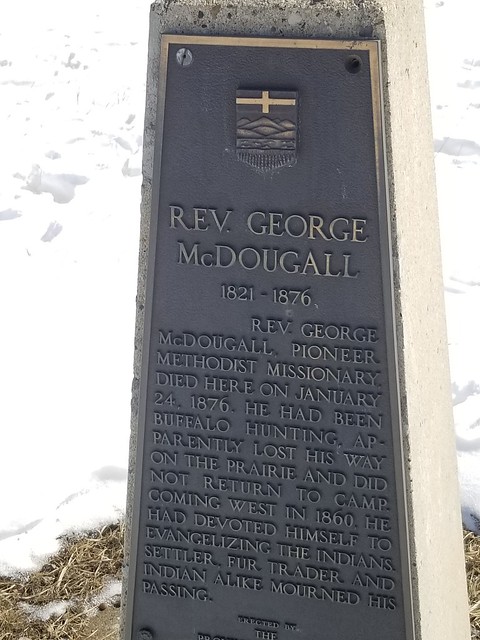 Yes, it’s amazing how areas change over time.  It doesn’t even take a lifetime.  For interest’s sake, go check out the listing on Canada’s Historic Places for the McDougall Memorial.  The site was formally recognized in 1976 and the listing describes it as “six kilometers north of Calgary”.  Wow, not anymore!The photos they show of this site show the cairn standing in the middle of bare prairie surrounded by a chainlink fence.  Those photos were taken in 2006, just a dozen years ago.

Well, that’s all for now.  What are/were your favorite historical spots which were threatened or lost to urban sprawl?

2 Responses to History and Urban Sprawl in North Calgary