Over the weekend, we ventured south to Nanton, Alberta.  The plan was to make the drive down, check out some of the antique stores, grab some drone footage of the grain elevators, maybe have some lunch and then pick our way back home.

One of my favorite stores in town is Sentimental Journey Antiques.  Now, we’re not flush with cash so buying antiques is pretty much out of the question, but the building housing this store is worth the visit by itself.

Built in 1909 as a hardware store, the building retains much of its original charm.  The upstairs was converted into a number of small apartments in the 1930s and so today as you wander around checking out the wares you can tell when you have stepped into a former kitchen or living room or closet.  It’s simply a fantastic experience.

And don’t forget to check out the basement.  Down a rickety staircase into the depths of the building where you’ll find a lot of tools and sporting goods and other material, including a very old furnace occupying a good chunk of one wall.  This is really my happy place, wandering through three floors of relics from the past.

Our wandering came to a halt when we reached one of the rooms upstairs, however.  There we found a box of old postcards, ranging in age from the 1920s through to the 1970s.  Many were unused but some had been posted and sent across the miles to family and friends at home.

We initially started looking through them to see the photos but soon started reading some of the ones that had been written on.  We noticed there were a lot of postcards addressed to the same Bendall family in Bindloss, Alberta.

It was quite a treat to read the messages sent to this family.  Most of the cards we addressed to the adult couple Bert and Maimie.  It appeared their siblings were quite the wanderers, and visited many places and were writing home to Bindloss to keep the family updated on their latest journeys.  Many of the postcards made reference to “young Aubrey”.

We came to learn that “young Aubrey” seemed to like stamps and the family was also collecting some uncancelled stamps to bring back with them, in addition to the ones used to mail the postcards — some of them costing as much as 4 cents!

We lost track of time so I honestly couldn’t tell you how long we sat there, sorting through the cards, pulling them out and reading aloud the words written all those decades ago.  It certainly was much longer than we expected to be there.

Before we left, we had to see if we could find what became of Aubrey.  We knew he was a fairly young child in the 1930s so we thought there might still be a chance for him to be alive.  I pulled out my phone and did a search for his name.

Our hearts sank as the first site that came up on the list was an obituary.  After reading a few lines we knew we had found the right Aubrey, as the names of his parents matched the ones we had seen on the postcards.

Aubrey had been born in Saskatoon, SK in July of 1927.  His parents Albert and Mary would have three more children after Aubrey, but he was the only one who lived past the age of two.  Aubrey was only a few months old when his family moved to Alberta, first to Cappon and then to Bindloss.

Like many children of the era, he was educated in a multigrade single room school.  He attended school until the age of 15 when he started work on the farms in the area.  In 1949 he moved to Banff and worked in the grocery store there until his father took over the UFA contract back in Bindloss in 1952.  Aubrey came back to Bindloss and worked with his father and they eventually also took on the postal contract for the town.  Aubrey would run the post office (and later a confectionary) in Bindloss until his retirement.  How amazing that he ended up running the post office where all those postcards were mailed back when he was a kid.

Aubrey retired to Medicine Hat and then moved into a nursing home in Brooks.  Just a few short months later, on August 13, 2013.  We were sorry to learn we missed our chance to get in touch with him as he sounded like a really interesting fellow.  We kind of had grown attached to him over the time we spent reading the postcard collection.  If we had the extra cash we would have loved to have bought the “Bendall collection” and kept them together — it seems wrong that they might get scattered to the wind via multiple purchasers. 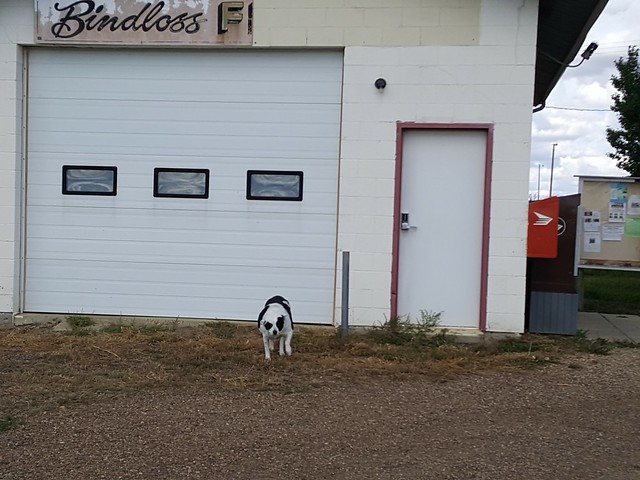 Aubrey’s obituary mentioned he was a volunteer firefighter for many years.  Here is a local dog in front of the fire hall in Bindloss on September 9, 2016. 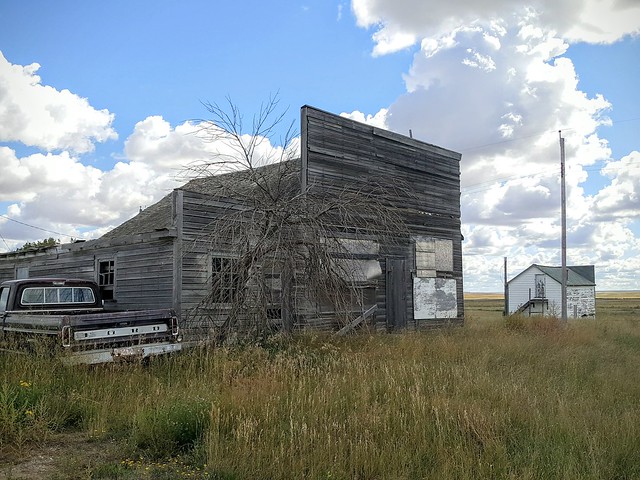 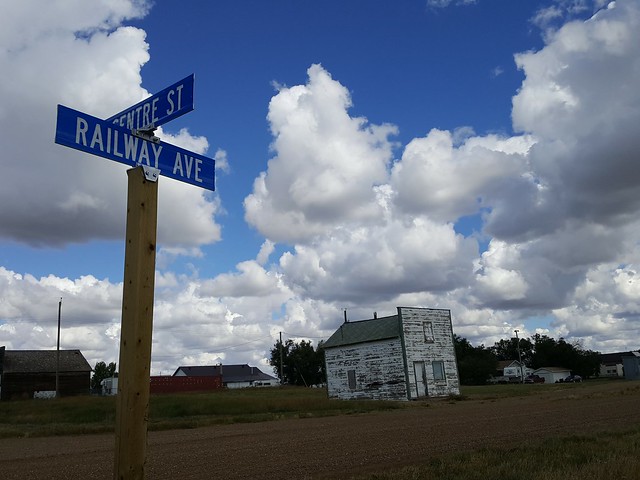 Looking northwest from the busiest spot in Bindloss, AB. 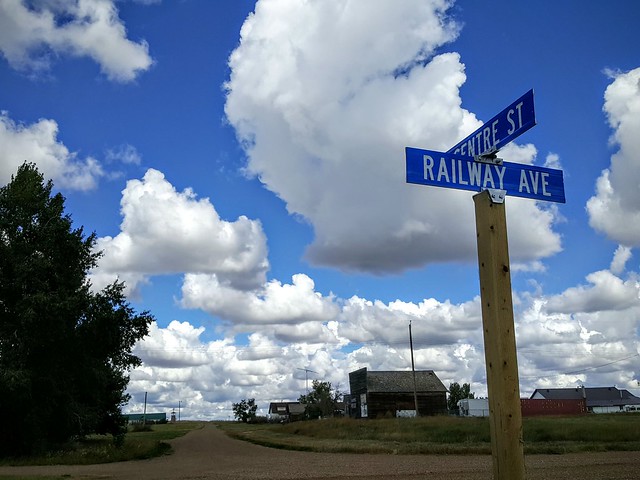 For some video of our day in Nanton, click below.