Our trees may not be busting out with leaves, but to borrow a phrase from Tom Petty, “I feel summer creeping in” and that means it is time to get back on the road and out exploring — at least as far as we can with fuel prices being so high.  I guess the only consolation is future readers of this blog will look back and say “Don’t you wish we could get gas for $1.349 / L again?”

In what felt like our first outing in ages, we set off to Rowley for the monthly pizza night.  We’ll get to that in a future post because we’re going to focus on the town of Big Valley first.

Big Valley is one of those places we keep coming back to.  We’ve made recent visits in July of 2014, May of 2016 (when we road in on the train from Stettler), and in July of last year.  There is some real magic in this little town of 349 people*.

While there was ranching and farming taking place in the area, the town really got its start when the Canadian Northern Railway came through in 1911.  By the next year the CNR had built both the railway station and the roundhouse and maintenance shops.  Big Valley was off and running and achieved village status on July 28, 1914.  Just a few years later, in November of 1920, Big Valley officially became a town.

During that period of booming growth, the Anglican Diocese of Calgary was given $500 from Caroline Leffler of England, who requested that the money be used to establish a Church of England somewhere in western Canada.  Their choice was Big Valley.  A prominent site on the hill on the westside of town was selected and local craftsman Walter Dennis set about building the church which would become St. Edmond’s.  The first service was held at the church in November of 1916. 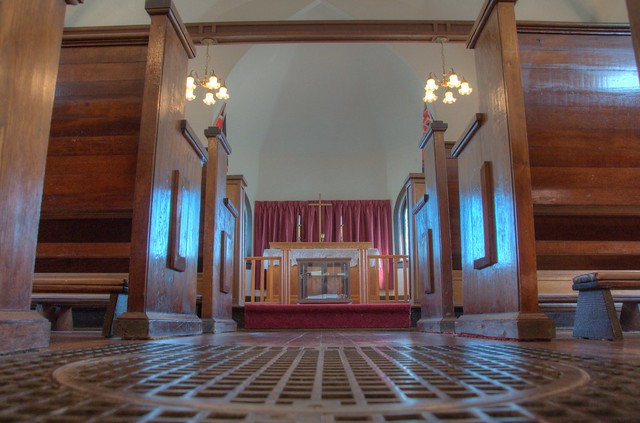 In 1923, the bell tower was added to the northwest corner of the church, which allowed the entrance to be moved.  Previously the entrance had been on the west side and often the harsh Alberta winds would cause snow to pile up against the doors.  The new entrance offered a much more sheltered location.  Apparently it was also at this time that the original stucco finish was changed to siding and painted in a more traditional cream color.

The blue paint dates back to 1974 when Big Valley was preparing to host it’s first homecoming, marking the 60th anniversary of the town.  The church had ceased holding regular services in the 1960s and had fallen into a bit of disrepair.  The locals wanted to spruce it up for the homecoming celebration and the story is that a local lumberyard had some leftover paint and donated it to the cause.  While it is said not everyone was thrilled with the blue color, it has since become a local landmark and it’s hard to image it being painted in any other hue.

While Big Valley boomed up until the 1920s, things started taking a turn after that.  In 1942 the town lost that status and reverted to being a village.  By the end of the decade the turntable at the roundhouse was removed as the diesel era of railroading was getting underway.

However, Big Valley remained a town that refused to disappear like many others.  The town’s grain elevator was erected in 1960.  And, in the 1990s the tourism industry really took over with the running of the Alberta Prairie Railway which runs from Stettler to Big Valley in the summer months.  (They used to run further south to Rowley but that line was pulled up and Big Valley is now the terminus.)

Now on weekends between May and October, the train brings thousands of tourists to Big Valley to walk the streets, see the historic sites, and enjoy a buffet meal in the local community centre.  The boom times that looked like they would never end back in the early part of the last century indeed have arrived and Big Valley continues to survive and thrive more than 100 years later.